The Secret Lives of Jessie Monroe

In each book in my “The Secret Lives of Jessie Monroe” spy series our heroine battles attacks on America that she is uniquely equipped to fight. Each novel weaves technology and current events, espionage and intrigue. The author’s background in software security, sophisticated technology, satellite tracking, and defense systems lend realism to the plots. 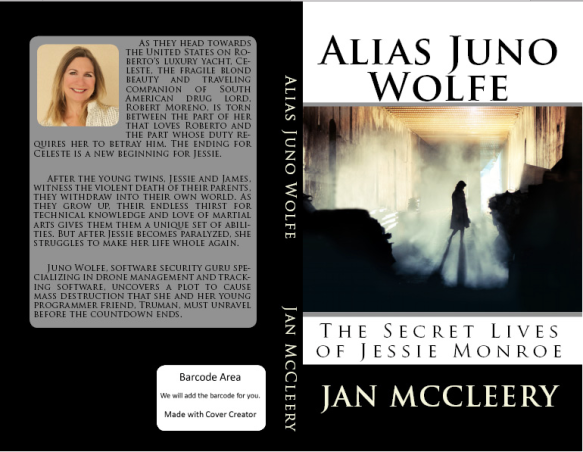 In the first novel, “Alias Juno Wolfe,” we meet Jessie, one of the young twins whose parents’ brutal murder sends them both into shock and reclusion. Living with their uncle, they are home-schooled and self-isolated but extremely smart and technical. Besides technology, they discover a love of the martial arts and, since their uncle works at the CIA, they find a niche for their talents as spies.

Jessie goes under cover as Juno Wolfe, software security guru specializing in drone management and tracking software, and uncovers a plot to cause mass destruction that Juno and her young programmer friend, Truman, must unravel before the countdown ends.

For more information about the book plot and the technology behind it, see Jan’s post “Spy Novels from the Duck Pond – Book 1 Alias Juno Wolfe”.

Who Is Juno Wolfe? 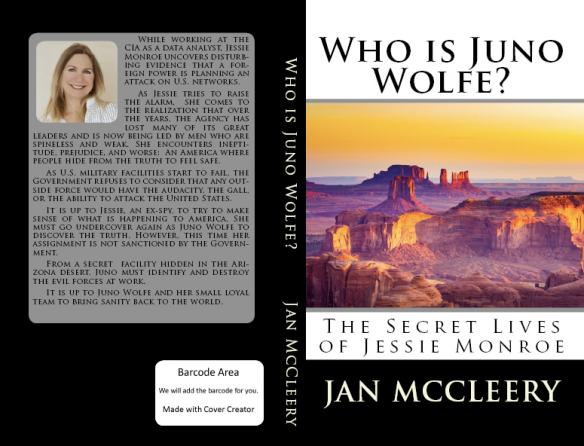 The second, “Who Is Juno Wolfe?” is a dystopian novel which was also quite prescient about the recently elected president’s coziness with the Russians.

Jessie is back at work at the CIA and finds evidence that a foreign power is planning to attack U.S. networks. As she tries to raise the alarm, she encounters resistance caused by inept and weak leadership. America has fallen into disarray. Jessie must go undercover again as Juno Wolfe.

From a secret facility hidden in the Arizona desert, Juno finds even more than she bargained for. It is up to Juno Wolfe and her small loyal team, aided by an unlikely band of Freedom Fighters, to bring sanity back to the world.

To read the backstory and more of the plot, read my blog: Backstory – Who Is Juno Wolfe?”

In the third book, “Finding Jessie Monroe,” while her twin brother, Jimmy, is running for President, Jessie goes under cover again into the Black Lives Matter organization to identify and stop the Russian-instigated terror attacks aimed at starting a racial war and ultimately overturning the American Government.

Under cover again, living one of her secret lives, Jessie searches to discover who she really is.